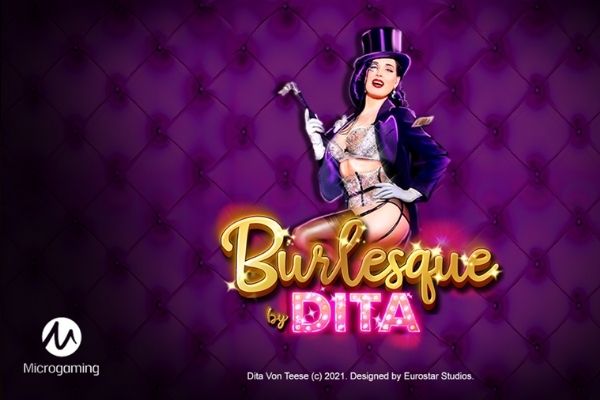 Enter the extravagant world of international burlesque superstar Dita Von Teese™ in a dazzling slot inspired by her lavish cabarets.

Players can prepare to be entertained by some of her striking signature acts and enjoy experiencing the Wild Pleasure feature during the base game that turns up to five reels Wild. Collecting at least three scatter symbols earns a VIP ticket to one of four show-stopping free spins bonus rounds, with each free spin taking players to a different venue where Dita has graced the stage.

From experiencing Dita’s famous feather dance in the Queen of Burlesque, where feathers can randomly turn symbols into up to 6x multipliers, to joining a wild party at the Moulin Rich™, where random symbols are transformed into additional wilds, players can expect the performance of a lifetime.

Burlesque by Dita™ is available exclusively to operators on the Microgaming platform from 22 July 2021.

Dita Von Teese™ is an icon and we were thrilled to get the opportunity to work with Aurum Signature Studios and Eurostar Studios on such a glamorous slot. With a glitzy soundtrack and entertaining gameplay, we can’t wait to see players enjoy this opulent slot.

Collaborating with Microgaming, Aurum Signature Studios, and Dita Von Teese on this slot has been a fantastic experience! Burlesque by Dita™ is packed with spectacular features and glamorous visuals, providing non-stop action and excitement, including four free spin bonuses for players to choose from, each with its own fabulous feature set.

We’ve had so much fun working on Burlesque by Dita™ and teaming up with Microgaming and Eurostar Studios on this exciting new slot that shines a spotlight on the Queen of Burlesque. This slot is full of rich features that give players a front row seat to an unmissable showcase and wins of up to 12,000x their bet.