Play’n GO returns to Wonderland with Agent of Hearts 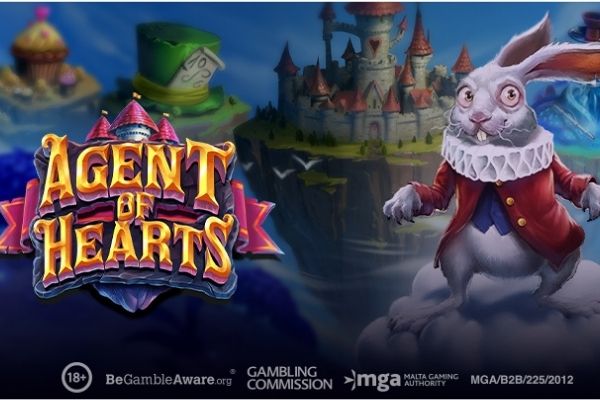 Heading down the rabbit hole again, Play’n GO release their next instalment of the Rabbit Hole Riches series, Agent of Hearts.

Wonderland is in dire straits. Everyone knows that the secret to Wonderland’s wealth lies with the Queen’s heart which is guarded under lock and key. News travels that the keys have been stolen. She has announced her Agent of Hearts to retrieve them and, in exchange, award a share of Wonderland’s enormous wealth.

Grid slot enthusiasts are in for a treat with this wonderful addition to the Rabbit Hole Riches series. Carefully designed to keep the player engaged as they endeavour on a mission to unlock the Queen’s heart, this game isn’t shy of features.

Non-winning spins can trigger random Wilds offering small wins throughout the game. Four of Wonderland’s renowned characters: the Mad Hatter, Cheshire Cat, Caterpillar and Dormouse, work their magic across the grid as they transform and destruct symbols, offering the player more variety in this already jam-packed game. The crescendo builds to the grand finale, where players release the Mega Wild.

Epic visuals and audio are used to immerse players in the colourful world of Wonderland. The artwork has a distinct style that captures the quirkiness of these characters and is carried throughout the series, which includes Rabbit Hole Riches and Court of Hearts.

There have been countless depictions of the White Rabbit and Wonderland’s characters through many mediums, so keeping the characters fresh while ringing true to Lewis Caroll’s original descriptions is no easy feat. Head of Games Charlotte Miliziano, said:

“Our designers do an amazing job of radiating the personalities of the characters in the Rabbit Hole Riches narratives, which I think is why this game is so compelling – it looks great!
We all have an affinity for things we know well and that are nostalgic, which is another reason these games are such a favourite among players.”