Spearhead Studios launches John Daly: Spin it and Win it 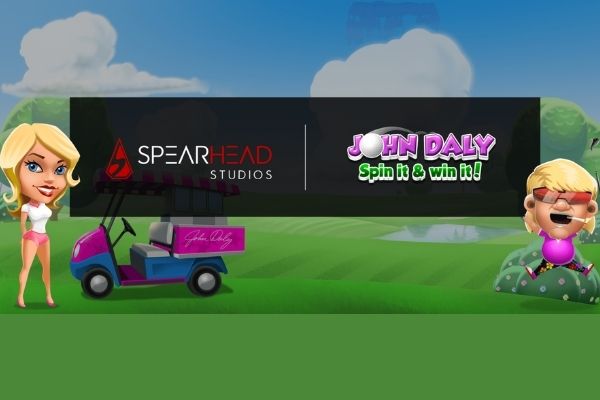 Game developer Spearhead Studios has officially released its newest branded slot title, John Daly: Spin It And Win It. This title brings the loud, colourful, and unpredictably exciting character of John Daly to life in the form of a feature-packed 5-reel 3-row video slot.

John Daly is an iconic American golfer with a successful career, known for his ‘zero to hero’ victory in the 1991 PGA Championship, playoff win in the 1995 Open Championship, and unique swinging technique and character. Recently, the veteran golfer and his son won the PNC Championship against Tiger and Charlie Woods at Grande Lakes in Orlando, Florida.

This captivating and highly volatile 243-ways game has three compelling base game modifying features, three unique bonus features, and a win potential of over 20,000!

The base game offers random wilds, a walking wild, and expanding wins modifiers. There are three distinctly different bonus features; ‘Free for All’ (free spins), ‘Sticky Balls’, and the unique ‘John Daly’s Big Hit’, a special feature where the great man whacks a ball into the heavens, causing massive win multipliers.

John Daly Spin It And Win It also brings plentiful other surprises to the fans, like being able to buy all six of the individual base game and bonus features. These options make it a truly outstanding title that delivers precisely what players want.

“John Daly: Spin It And Win It is our new marquee game. It is by far the most feature-rich title we’ve ever produced, crazily volatile, and with no less than eight buy features. More so, the ability to gamble their bonuses gives players unparalleled control over how they want to play.”

Operating under EveryMatrix Group, Spearhead Studios’ portfolio of 80+ titles is now available across 14+ markets in Europe and Latin America, with the United States coming soon.