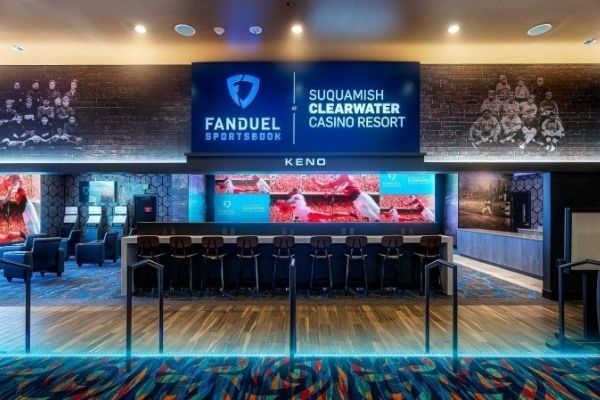 Port Madison Enterprises, the business arm of the Suquamish Tribe, and sports betting giant FanDuel, held on Friday the grand opening of the new FanDuel Sportsbook at Suquamish Clearwater Casino Resort in Suquamish, Washington. Washington Indian Gaming Association took the opportunity to warn that this business is under threat from a cardroom operator seeking to overturn tribal gaming compacts.

The opening day featured NFL Legends Steve Largent and Jim Zorn, who teamed up to open the brand new amenity at 4 PM and took part in a ribbon-cutting ceremony. Largent then placed the ceremonial first bet, with Zorn following soon after.

The new sportsbook opened just in time for the Super Bowl and is located off the casino floor near the Agate Pass Deli and Seafood Bar. It’s a 2,086 square foot amenity, which features three live betting windows and twelve IGT PlaySports self-service betting kiosks, and offers wagering options “across all major sporting events.”

“With the launch of our sportsbook, revenue from sports wagering will help support the Suquamish Tribe’s important governmental services offered to both tribal members and the local non-tribal community.”

FanDuel is set to provide its proprietary risk and trading technology, which leverages the IGT PlaySports platform “to offer bets on all major US sports,” according to a press statement. These include pro football, basketball, baseball, tennis, MMA, soccer, golf, motorsports, among others. Bets cannot, however, be placed on college teams located in Washington state.

FanDuel will be offering on-site service experts who will walk customers new to sports betting through the wagering process, as well as an online betting guide, explains a press release. Washington marks the 14th state where the sports gaming giant offers retail sportsbook locations.

“This has been a special project for us because it has allowed us to expand our retail footprint to the west coast,” said Keith Wall, Vice President of Retail, FanDuel Group.

“The Suquamish Tribe has been an amazing partner throughout the process and Suquamish Clearwater Casino Resort is an amazing property that everyone needs to visit for the stunning views, world-class entertainment and now legal sports betting.”

Also on Friday, the Washington Indian Gaming Association (WIGA) released a statement on the launch of sports betting at Suquamish and Squaxin Island tribal casinos. While the Suquamish tribe opened its FanDuel Sportsbook at Clearwater Casino on Friday, the Squaxin Island Tribe’s Little Creek Casino in Shelton debuted a sportsbook on Tuesday. On that sam day, Spokane Tribe Casino announced an exclusive agreement with Caesars Entertainment to bring Caesars Sportsbook to the Washington property, in line with the first phase of its expansion plan.

After the Snoqualmie Casino began offering sports betting in the state in September, now more tribal casinos across the state are going live with wagering on sporting events, with a total of 16 tribes approved. However, the WIGA warns that tribal gaming is “under threat from a neighborhood card room operator” seeking to overturn tribal gaming compacts.

“The launch of sports betting at these tribal casinos in Washington State is another step forward on the road to greater self-determination for Washington State’s tribes,” said Rebecca George, Executive Director of the Washington Indian Gaming Association (WIGA).

“Our tribes rely on the revenues generated by our casinos to fund important public services for some of the most historically marginalized and underserved communities in Washington State.”

George further said that tribal gaming is “safe, responsible, and benefits communities across Washington,” under a system that “strikes the right balance.” According to her, through compacts, additional tribal investments, and community partnerships, tribes have minimized “the negative social consequences” that may result from gambling. However, she sees this now under threat.

“Now one private gambling company incorporated in Las Vegas is seeking to destroy the safe and proven system of tribal gaming that we have put in place over the last three decades,” the Executive Director said.

“Their federal lawsuit, which seeks to overturn the tribal gaming compacts carefully negotiated over three decades between tribes and state leaders, would cause irreparable harm, not just to historically marginalized tribal communities but to the general public as well.”

According to the WIGA, the lawsuit seeks “to expand gaming far beyond sports betting,” seeking to offer multiple new forms of easily accessible gaming. “This is an attempt to force a huge expansion of gambling in Washington state against the will of the public and the bipartisan decisions of the legislators who represent them,” the trade association warns.

“Tribes in the state of Washington are committed to conducting sports betting and other forms of gaming safely and responsibly, and we stand united in opposing any attempt like this lawsuit that attempt to undermine the Indian Gaming Regulatory Act, tribal compacts, and what the tribes have worked so hard to build over decades of effort,” George concluded.

The company to which the WIGA and George allude is Maverick Gaming, which owns several cardrooms throughout the state. While tribal casinos have been greenlighted for sports gaming, cardrooms are not allowed.

“There’s clearly room for both of us,” CEO Eric Persson claims, according to Komo News. “This isn’t an either-or. This isn’t the tribes should have it or the cardrooms should have it. There’s room for both and both of us will prosper and benefit. We’re looking forward to the day where Maverick Gaming is a participant in commercial sports betting in our state.”

The company filed a lawsuit back in January in the U.S. District Court. Maverick Gaming is challenging the Indian Gaming Regulatory Act, claiming that it has given tribal casinos a monopoly over sports betting in the state.