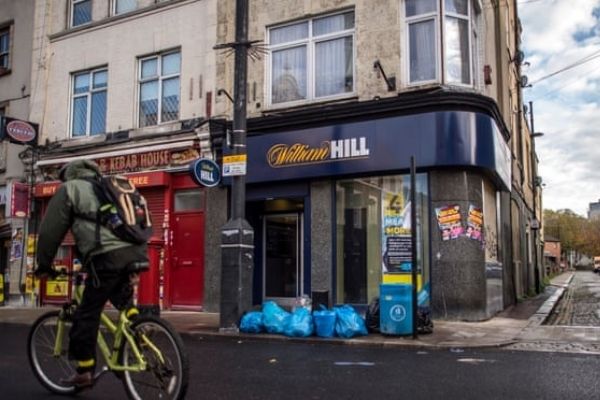 The online casino company 888 Holdings has confirmed its £2.2bn purchase of William Hill International and signalled its intent to keep the bookmaker’s 1,400 shops as part of a foray into bricks-and-mortar betting.

William Hill has been owned by the Las Vegas casino company Caesars since last year, when shareholders accepted a $3.7bn (£2.7bn) takeover bid, but the American firm was open about its lack of interest in the British company’s 87-year-old brand, its high-street bookmaking shops and its non-US online operations.

Caesars was instead keen on acquiring William Hill’s expertise, gleaned in the UK’s competitive £2.3bn-a-year online sports betting industry, to underpin an assault on the fast-growing US market after the supreme court overturned a long-held ban on sports betting in 2018.

Its lack of interest in anything except that lucrative expansion drive prompted a bidding war for the unwanted non-US assets, involving Apollo Capital Management and CVC Capital Partners, as well as 888.

On Thursday, 888 confirmed it had won the race to acquire the remainder of William Hill and said it expected to complete the deal in early 2022, subject to approval from shareholders.

Investors holding 47% of 888’s shares had already approved the deal, either with expression of support or irrevocable undertakings, it said.

“We did see interest in the retail [estate] from the outside but we feel that the retail is an integral part of the William Hill asset.”

William Hill has already trimmed its shop network from 2,333 in 2018 to about 1,400 today, a process accelerated by the effect of Covid on the high street and the revenue-crimping effect of the cut in fixed-odds betting terminal (FOBT) stakes from £100 to £2, which took effect in 2019.

“Today they’re managing a very well-run retail estate that’s present in good and prime locations,” Pazner said.
We’re planning to keep the retail stores and the great people they have in them.”

William Hill’s high street rival Betfred was thought to be interested in acquiring the bricks-and-mortar shops in a deal that would have nearly doubled the size of its UK network.

Pazner said 888 was determined to go ahead with the transaction, despite uncertainty over the outcome of a landmark government review of gambling legislation expected to result in a crackdown.

He said the deal made “even more sense” in the light of regulatory uncertainty, because a larger company would be better able to cope with change.

Online casino products are widely expected to be a target for reform, with ministers considering measures such as a £2 stake limit on virtual slot machines, in line with FOBTs.

Pazner said adding William Hill’s more heavily sport-focused business would offset that risk but said this was not part of the logic of the deal.

888 has been keen for a combination with William Hill since at least 2016, when it teamed up with the bingo hall owner Rank in an attempt to forge a three-way merger. That deal, which failed, was itself an attempt to turn the tables after William Hill had bid £700m for 888 in 2015.

In a statement, 888 Holdings said it expected the transaction to result in synergy savings of £10m next year and up to £100m a year by 2025.

It has taken on £2.1bn of debt to fund the transaction and said it would issue up to £500m of new equity to reduce the leverage built up on the deal.

Russ Mould, the investment director at AJ Bell, said the takeover “catapults 888 into the big leagues”, theoretically taking its sales from $814m to $2.5bn and its underlying earnings from $156m to $464m.

He also highlighted the complete reshaping of the UK gambling landscape over the past few decades.

“In the 1970s and 1980s, the British betting scene was dominated by the so-called ‘big four’ bookmakers: Ladbrokes, William Hill, Corals and Mecca. Not one of those names is now independent,” he said.

“Instead, the new leaders are [Paddy Power and SkyBet owner] Flutter Entertainment, Entain [owner of Ladbrokes-Coral], Bet365 and now 888 [owner William Hill, which merged with Mecca in the 1980s].