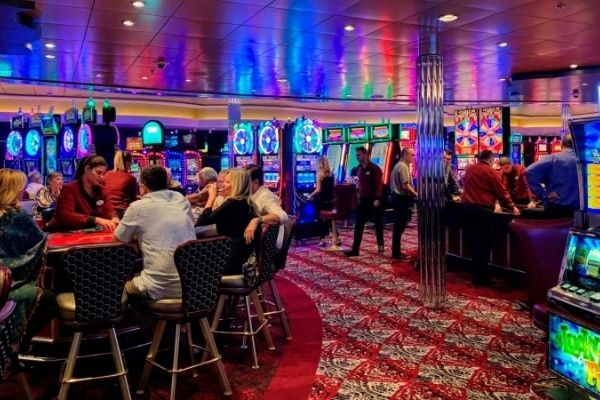 Carnival Cruise Lines and Royal Caribbean are reinstating smoking in their casinos starting this week. The two lines were among several that enforced casino smoking prohibitions last month amid tightened Covid-19 protocols in response to the omicron variant.

Carnival’s new casino rules, effective with cruises departing on or after Monday, February 14, state there is no smoking allowed in the casino unless the guest is seated and playing, Cruise Citric reports. Seats at gaming tables and slots are reserved for players only.

Guests at the casino must, however, still wear a facemask, unless they are “actively smoking or drinking their beverage,” according to an updated policy. While the casino bar is to remain open, it is considered a no-smoking area, much like the rest of the ship.

While smoking is permitted at casinos when playing, it is banned when the casino is closed, and likewise is not allowed “anywhere on board” during refueling for safety issues.

“We appreciate our guests’ support of these protocols implemented with everyone’s best interests in mind,” Carnival stated.

Meanwhile, Royal Caribbean has updated its smoking policy in order to, once again, allow guests to smoke in designated areas of the ship. Cigarette, cigar, e-cigarette and pipe smoking is permitted in designated outdoor areas and will be permitted at specific areas of its casinos.

Smoking bans were introduced by several cruise lines in an effort to tackle Covid, to mixed reception: while smokers protested the measures, non-smokers generally welcomed the policy. Likewise, most companies introduced mask mandates within their ships, which some, including Royal Caribbean, Regent and Oceania, are now seeking to lift.

However, not all cruise lines are on board with the return of smoking. Bans still remain in effect on Holland America and Princess cruises until March 31, according to the previously cited news source.

The policies introduced to ban smoking on cruise casinos amid the pandemic are not dissimilar to those mandated on land-based casinos. For instance, Atlantic City, in New Jersey, introduced a smoking ban at its casinos as a Covid-19 transmission-prevention measure in 2020, although the ban expired in April 2021. Casino employees have since tried to get it reinstituted.