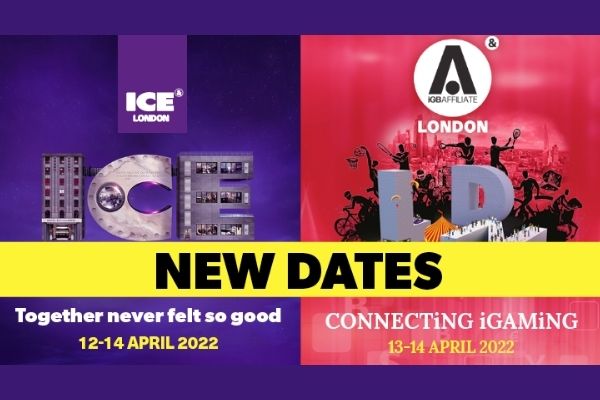 Clarion Gaming has confirmed that ICE London will now run from 12 to 14 April 2022, with iGB Affiliate London taking place over 13 and 14 April.

ICE London was originally due to take place from 1 to 3 February, followed by iGB Affiliate London from 2 to 5 February 2022, at ExCeL London. However, the events were postponed as a result of the uncertainty caused by the Omicron variant of Covid-19.

The week at the ExCeL will begin with the ICE VOX conference, which starts on 11 April with the World Regulatory Briefing and International Casino Conference, running to 13 April.

ICE then opens its doors on 12 April, with iGB Affiliate London kicking off a day later and this year’s iGB Affiliate Awards hosted at The Troxy that evening.

“Following consultation with our customers globally, market concern at the uncertainty caused by the Omicron variant and the primary objective of providing a safe and secure environment for visitors, exhibitors and venue staff we have secured new dates for ICE London, ICE VOX and iGB Affiliate London from 11 to 14 April 2022,” Clarion Gaming managing director Stuart Hunter said.

“What for many buyers and brands is becoming the most influential week in world gaming succeeds in bringing together upwards of 700 exhibitors to ExCeL London and I would like to pay tribute to the ExCeL senior management team which has worked tirelessly alongside us over the Christmas break in order to accommodate events of this magnitude and help us to deliver the best possible solution to our stakeholders.”

Hunter added that amid “intensive” discussions on the rescheduled dates, Clarion Gaming had been committed to avoiding a clash with the Indian Gaming Tradeshow & Convention, which takes place from 19 to 22 April in Anaheim, California.

“[We] have been in close contact with colleagues at the National Indian Gaming Association who in turn have been extremely sensitive to the circumstances caused by the Omicron variant,” he said. “Again, I would like to put on the record my thanks for their understanding and support. We will continue to work through any remaining challenges with all of our clients and stakeholders and support them with their preparations and planning for what is the world’s biggest and most influential gaming industry gathering.”

“I’m delighted that we have been able to secure new dates a little more than six months after our Amsterdam events,” Barton said.
“The focus now for my team is to build on the momentum of what was a record breaking show for the iGB brand, and consolidate its ‘best in class’ brand credentials by delivering the largest global iGaming affiliate event this April.”